MPV hire Prague – The V-Class of Mercedes cars hasn’t been on the market since 1996, but now it is coming back and replacing Viano. Mercedes Benz V Class with eight seats combines practicality and brand’s famous aesthetic appearance, which is a positive change from the disappointing R-class.

Criticism which that appeared around the Viano’s engines‘ poor fuel economy led to developing two new engines, which will be introduced when the V Class is launched. The first one is a 2.1-litre four pot diesel that develops 161bhp, and the second one is a 2.1-litre BlueTec hybrid that generates 188bhp. Choosing the V220CDi, you’ll see returns of 49.6mpg, whilst you’ll emit just 149g/km of CO2. The V250 BlueTec Hybrid can return 46mpg whilst emitting 157g/km of CO2. The former model is wedded to a six-speed manual transmission as standard, with the latter mated to a seven-speed automatic gearbox as standard.With the V220CDi model you can get from rest to 62mph from in just 9.1 seconds, with the V250 BlueTec Hybrid it will take a little longer, getting there in 13.8 seconds. Although it is a nice feature, the buyers of this car will not have the speed as their primary requirement. With the completely new suspension setup and the front-wheel-drive, you will fall in love with this car in just seconds. Another feature is derived from the C-Class and it is the use of electromechanical steering system and the body control is perfect for a vehicle of this size. MPV hire Prague

One of the downsides of Viano is its appearance. The new Mercedes Benz V Class with chauffeur is a different story. Complete change with a new cut just takes your breath away the moment you step inside. Modern interior with a sense of individuality, chrome-rimmed instrument dials, and a seven-inch infotainment system gives the car a top-notch quality. Even though the MPV is not very renowned this particular car simply has style. Besides with today’s technology customers have options for customization of the vehicle such as matt-finish wooden trims, or Nappa leather upholstery, and the steering wheel is even taken from the C-Class. Usually with new products manufacturers just upgrade older models, especially when it is famous brands like Mercedes. In this case, however, the manufacturer decided to go against the old-fashioned thinking and instead create something brand new, unique, magnificent, something different. Seats are more comfortable than ever before and the layout is so versatile you won’t be able to believe it. MPV hire Prague 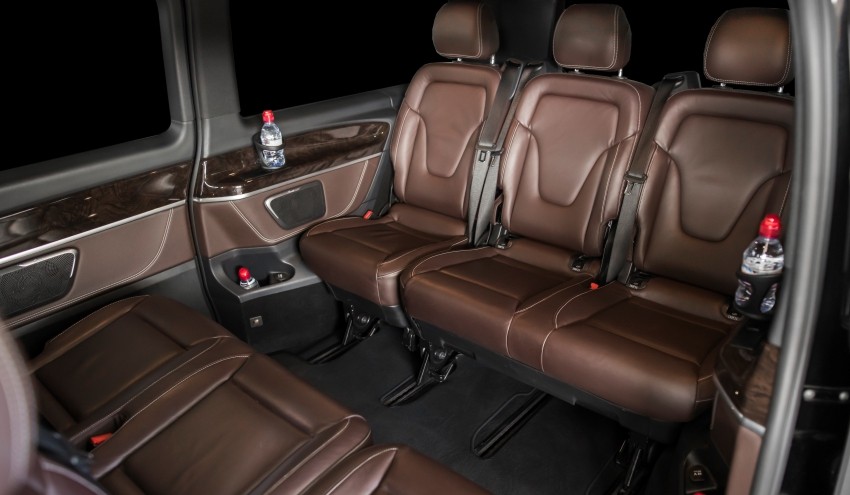